While driving to work today (Nov 29th, Christchurch NZ) I saw a ~four meter long fibreglass model of Thunderbird 2 parked on the roadside. It had it's wings lowered obviously to facilitate transport. It is hollow with wooden bracing (the underside is open) and even has turbine blades behind the inlets. I've no idea if it's part of something we'll see in public around here soon or just someone's hobby project. It occurs to me that it might be a prop for the advertising of the 'Thunderbirds are Go!' stage show, which I've seen and really enjoyed but haven't heard is coming around again - so that's just a random guess.

For those with Google Earth installed, this is where it was parked.

Update: I'm told it was a float in yesterdays Santa parade, alongside such other luminaries as Kitt, Knight Rider's car. 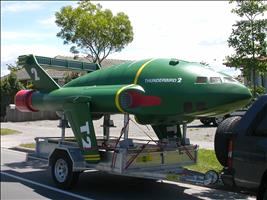 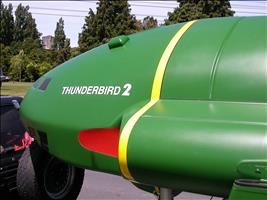 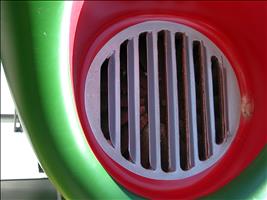 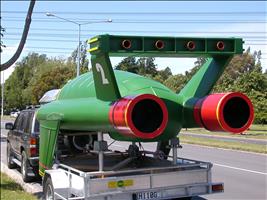 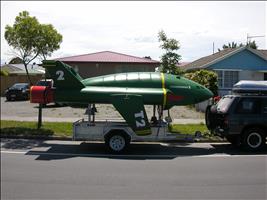 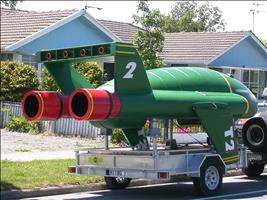 I just noticed (and I didn't when I had a chance to investigate) that it's got bumps to each side above the cockpit. Those aren't on the 'real' Thunderbird 2, although when I look at it on TV episodes there is a hard to identify discolouration at those spots. Seems quite strange on an otherwise excellently detailed model, although if it means the builder did it all from just watching TV episodes and had concluded the discolourations were bumps it makes the rest of the work all that more impressive.

From the first episode of Thunderbirds.

And here it is on it's float in the Christchurch Santa Parade 2006. 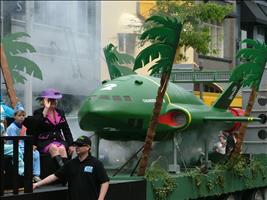